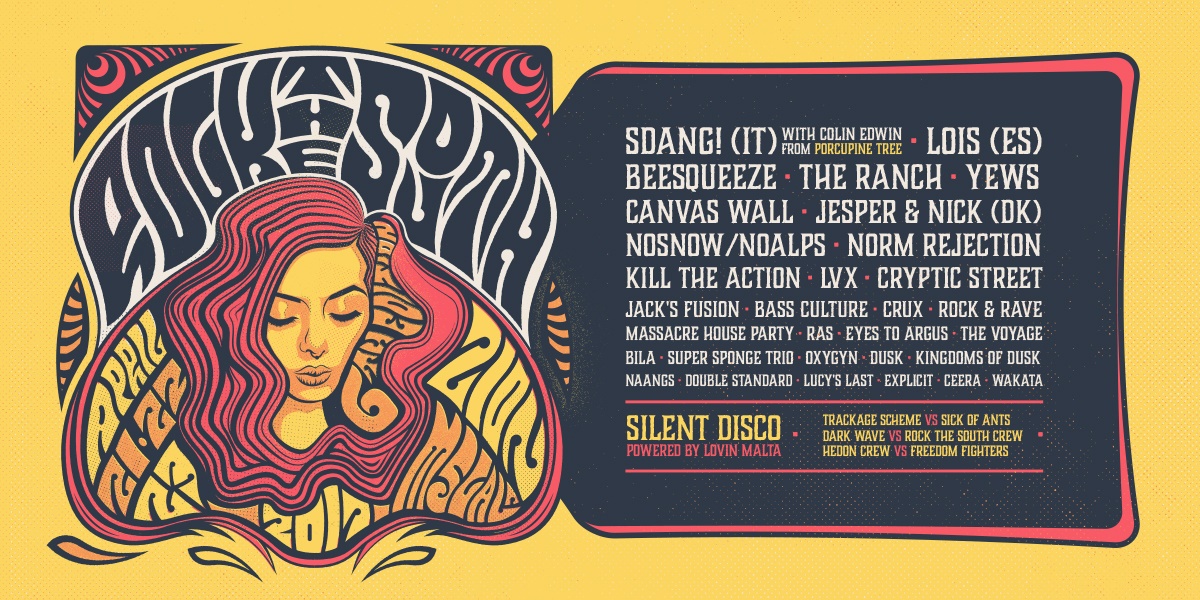 **Online tickets sold out. Tickets available at the door**

Rock The South Malta is back for the 6th edition. This year we have a lot of great acts. 3 days of jam packed live music 2 stages and over 30 bands and artists, plus now the much anticipated silent disco as well. This year the event will be held on the 21st, 22nd and 23rd of April at Zion Reggae Bar.

On Friday 21st April we will kick off around 6:30pm which will include CEERA, NAANGS and Beesqueeze headlining the first stage. The second stage will be dedicated to alternative rock and post punk, kicking off are WakaTa together with Dusk, Cryptic Street and Spanish act Lois, he’s just started his solitaire career and yet been featured in magazines like NME or blogs like The Line Of Best Fit as an artist to keep your eye on – “the next artist who is going to cross borders from the excellent DIY scene of Madrid”. We will end the party with the Bass Culture crew and some proper bass groves.

Saturday 22nd April again at 6:30pm on the first stage we will have indie pop rock bands:
Massacre House Party , Canvas Wall and nosnow/noalps
The second stage will be dedicated to more music less singing with
Kingdoms Of Dusk, Super Sponge Trio, The Ranch and after the great success they had last year at RTS we decided to bring them back. Sdang! from Italy will back with a special guest this year ‘Colin Edwin’ fromPorcupine Tree, we are extreamly excited about this 😀
ending the night we have a special set from Rock & Rave playing us the best music of the past 65 years.

Sunday 23rd April we start from 3pm with the Afternoon sessions withLucy’s Last, EXPLICIT, Jack’s Fusion, The Voyage and Jesper Ejrup is gonna be back with a good friend and huge talent Nick Jones from Denmark.
The evening first stage will be dedicated to more electronic and melancholy acts: Oxygyn, Eyes to Argus, CRUX – Official and YEWS
The second stage is dedicated to Punk rock and Metal
with Double Standard, BILA, RAGE Against Society and Norm Rejection ending the night we have Kill The Action followed by a live set from LVX.